Our patented process makes installing your air pillow EASY! No more hassle with ropes and ties! 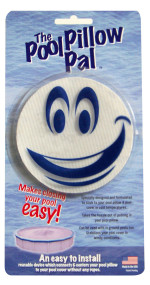 Download Our Flyer!
Download our one page Flyer for information to have on hand for you & your customers!
FLYER.pdf
Adobe Acrobat document [1.0 MB]

Ask for "The Pool Pillow Pal" by name!

We have partnered with major distributors as well as retailers large and small who carry The Pool Pillow Pal, so wherever you buy your pool products and supplies, ask for it by name..."The Pool Pillow Pal"...your pal when closing your pool!

Here is a little "pool-side" reading about how The Pool Pillow Pal came to be...

Many inventions that we take for granted today have been born out of frustration and need, which is the origin of The Pool Pillow Pal as well...

The developers of The Pool Pillow Pal are Tony Oropallo and Wesley Clark. We are brothers-in-law as well and we have resided in Connecticut all our lives, and both of us have owned above ground swimming pools for many years. The story begins in 1993 with Tony's first pool, which was a 15’ x 25’ above ground swimming pool which his parents bought for him and his family as a gift for their new home they just built. New house...new pool...lots of memories. This is where the story begins...

Being a new pool owner, it was learn-as-you-go. The first year was wonderful and there no problems and they enjoyed the pool greatly, but as the saying goes, "all good things must come to an end." In Connecticut around September, as in many other states, the season changes and we must get ready to close the pool. This was Tony's first encounter with closing a pool. There was a lot to learn.  One curious aspect about closing the pool was that big inflated air pillow that needed to be placed into the swimming pool before covering it. It was explained to Tony that it would help when ice formed. Not understanding exactly why that was needed, Tony did as the pool store attendant instructed him. (He should have asked more questions but he didn’t of course. He doesn't ask for directions when driving either! Ask my sister.)

That first year when he closed the pool Tony recalls how difficult and unpleasant it was to put that pool pillow into place! Trying to tie the pool pillow into the pool so it stayed in the center is nearly impossible, and you can never quite figure out how much rope to use. Then pulling the cover over the pillow would always move it out of place, or the ropes your break or disconnect, etc. This annual event became a dreaded one! In fact, so dreaded that one year Tony decided not to use a pool pillow. Because he didn't use a pool pillow, the closing season was the most pleasant closing experience Tony had...or at least until the following spring...

While preparing to open the swimming pool that spring Tony noticed that the wall on one side of the pool was crimped. Not thinking too much of this he went to the pool store to buy the chemicals and stuff to open the pool. In speaking to the sales person about the crimped wall, he learned that he might have a fatal flaw in the wall and may need a whole new pool! Well this was confirmed by the pool installation company which originally put in the pool. But why? But how? It did not take too long for the tech to figure out the why and the how...NO POOL PILLOW!

It was at that point the value of a pool pillow was learned...the hard way, to the tune of $3,000 dollars for a new pool!! It was also learned that the scientific name for the pool pillow is an Ice Compensator. Determined not to suffer such a loss again, Tony made it an annual event to use the pool pillow, frustration and all!

However, in the spring of 2009 a simple concept began to bloom and take root..."why not connect the air pillow to the pool cover rather than connecting to the walls of the pool?" It made sense that by connecting the two components it would be much easier to place into the pool and it would stay centered as well, and it would also make it so that one person could place the pool pillow and cover onto the pool.

Tony called his brother-in-law Wesley Clark, a retired Connecticut State Trooper and also a pool owner, and found that we both shared the same frustration of putting in the pool pillow at the end of the season! We both agreed that it was a great idea and went to work figuring out the best way to accomplish this, and after numerous trials and errors we arrived at The Pool Pillow Pal!

First Orders Are Out!

We sent out the first orders of The Pool Pillow Pal today (08/25/11) just in time for closing season. We are very happy with the feedback from retailers and customers! 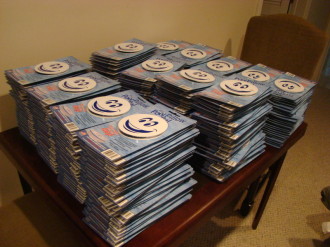 National Distribution on our 2nd year!

After going from dealer to dealer around Connecticut and New York our first year at the end of the closing season in 2011, we had such POSITIVE feedback from the dealers and customers as well, we knew we had a winner with The Pool Pillow Pal! The simple reason is that is solves a very frustrating, time-consuming process of closing swimming pools.

In 2012 we started going to trade shows in the pool industry and continued to get great feedback from professionals within the field...people with 30 and 40 years in the industry were excited about this product. We met with many regional and national distributors of pool products resulting in The Pool Pillow Pal being distributed nationally within the United States as well as into Canada for 2012 and beyond!

Tony and I visited South Pack in New Britain, CT today (06/22/12), which is the company that is manufacturing The Pool Pillow Pal. It was very cool to see the process that goes into getting this "smiley little guy" into everyone's pool in the fall! 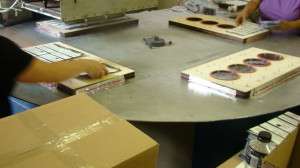 Boxed and ready to ship!